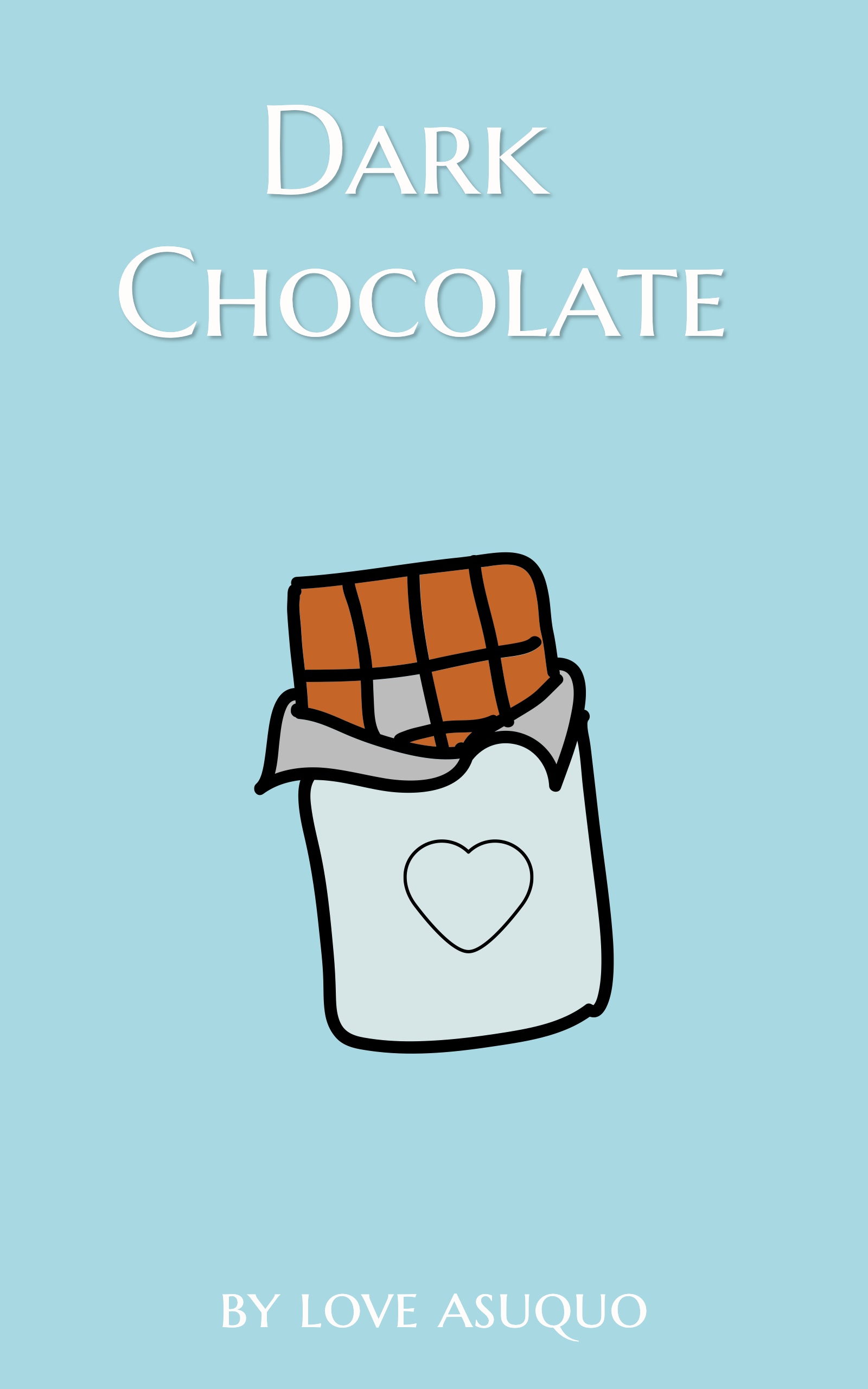 No portion of this short story may be distributed in any form without the written permission of the author.

“Kandibe. My Kandi.” I heard a masculine voice say sweetly.

My “oyinbo” sister rolled over in bed, turning off her phone’s loudspeaker and pressing the device against her left ear as she giggled like a little schoolgirl.

I leaned against her door, peeping through the little crack at the side and trying to breathe quietly, as she picked up a piece of the mirror and stared at her reflection.

“Chima o, me? Sweeter than Candy?” she exclaimed loudly into the phone, as she threw her head back with laughter and turned her face away from me.

Kandi had always been beautiful. She’s my immediate elder sister, right after Lotachukwu, our eldest.

She’s also our mother’s favourite, maybe because she had the prettiest face or because she clung to Mama’s side more often, or unlike Lota, Kandibe did not mind being Mama’s “Investment and Personal Puppet” – a term Aunty Nene coined during one of her numerous fights with her sister.

I would often hear Mama brag about Kandibe to her friends, telling them she would be married to the richest man in the village and her wedding would be the talk of the town.

Mama would take Kandibe to all the social events in town, and every time they came home, Mama would have her nylon bags filled with royal beads, money and all sorts of gifts.

Kandibe was the centre of attraction and mama knew how to set the stage for her.

Kandibe was excluded from all physical chores in the house – Lota and I were left with it. Mama would sometimes come home from the market with sweet-smelling bottles of cream and give them to Kandibe.

“Do you not see your sister’s skin? It is like imported White Chocolate, the kind your uncle brought for us from Are-mrica.”

Mama’s creams have worked their magic. Kandibe looks like one who has lived in the Whiteman’s land for at least a year.

I jumped and turned around. Lota.

“Kedu?” I greeted, as I looked away with guilt.

“Ada, come with me. Mama will be back soon, and we have to peel these cocoyams fast.”

I sighed. I was Ada. The one whose name meant beautiful. Even Lota had beautiful fair skin and not the kind that needed Mama’s creams.

Why did mine look like the bottom of Lota’s favourite cooking pot?

Lota walked towards the backyard and I followed.

I watched as she dropped her cocoyams on the floor and sat on the raffia mat underneath the shed. She reached for the knife, grabbed a cocoyam and began to peel off its skin skillfully.

Cooking was not my selling point. Mama always complained.

If the “excess meat” that made my stomach protrude like a pregnant woman’s would drive a man away, wouldn’t the extra pieces of meat in my Oha Soup drive him into my kitchen and in between my laps, smacking his lips together and nodding with satisfaction?

“You can’t just sit at the balcony all day, Ada! Mbanu! A woman has to learn how to cook.” My mama had chastised me just the night before.

“But Mma, what about Kandi?” I asked her. I could count the number of times she had been at the backyard to watch Lota cook, and most times, it was just an excuse to pinch at the fried fish.

“Taah! O Gini? Leave Kandibe alone. Have you not seen how the men cannot keep their eyes off my White Chocolate when we go to town? Kandibe will have a dozen housemaids and they will do all her cooking for her.” Mama boasted.

I nodded. Kandibe’s housemaids would be like Dark Chocolate then.

The kind Mallam Shehu sold at his small kiosk down the road.

The kind I resembled.

“Ada!” Lota called, forcing me back to the present.

She sighed and offered the Cocoyam she was already peeling to me.

I couldn’t help but wonder – Is Lota the kind of woman that made the heads of men turn too?

Or were her delicious delicacies her saving grace?

I nodded and sat beside my sister, taking it from Ada’s yellow-like-pawpaw hands.

You’d be forgiven to think my dark skin would stain the half-peeled Cocoyam.

I rolled it over in my hands. No stain yet.

I picked up a knife from the basket and watched Lota slice the skin off another Cocoyam. Slowly, I followed suit.

“O di nma! I’ve heard you o, I will come to visit soon.” I heard my sister Kandibe say, as she walked into the backyard, swinging her slender waist like the pendulum clock at grandpa’s house.

“Bye. I will call later,” she promised her caller, ending the call.

Kandibe took her phone off her ear, smiling down at it.

Finally, she looked our way, a smile plastered across her face.

“Adamma, biko take my phone, go and plug it to my charger. I’m going to see my friends in the village square.”

Was I going to be one of the maids of my sister someday, I wondered.

“Go!” Kandibe ordered, pushing me towards the entrance of the house.

I let my feet lead the way towards her bedroom and I pushed open the door and looked around.

I found her charger and plugged it in. Just as I turned to leave, her phone vibrated.

I looked at the screen. My Love scrolled across it.

I felt a tingle of excitement and slowly, my finger found its way to the answer button.

I smiled, resting my silly head against Kandibe’s pillow and unplugging the phone. I imagined I had dropped this life and pick up another.

“Are you there? You didn’t even tell me you love me before ending the call ehn.” I heard the voice say.

“I love you,” I whispered so softly it was barely audible.

My new lover whispered his “I love you” back to me, and I laid in Kandi’s bed, replaying it over and over in my head till sleep caressed me like a lover.

At church today, Reverend Abasi spoke on becoming a friend of Jesus Christ.

I see pictures of Jesus every day. In the pamphlets that they pass around during the service, on the billboard outside Saint Timothy Church where Mama, Lota, Kandi and I go every Sunday morning, and even as stickers on the cars of the big men in our village.

Jesus is white. He has long black hair and brown eyes.

“Jesus came for white people, not us,” my friend Ezinne once said, “We have Ala and Amadioha.”

When we got home that Sunday, I wondered what our gods looked like.

Jesus looked like the Americans on the Television screen at Mazi Obi’s house, and Reverend Abasi said Jesus created man in his image.

Did he mean the white man?

Maybe I was the punishment because Mama refused to let Papa marry another wife instead of giving birth to “just one more” — another girl.

Ezinne thinks that is why Mama doesn’t like me that much because my birth made Papa finally leave us.

From the window in my bedroom, I can see Lotachukwu in the backyard, doing the cooking.

As she bends over to adjust the firewood, I can see her birthmark that covers a portion of her lower back, peeking out from underneath her blouse.

It is hard to miss, and the first time I saw it almost a year ago, I wondered how I’d never noticed it before.

It’s a very dark birthmark and against her fair skin, it seemed odd and ugly.

I walked out of my room and into the backyard, watching my sister cook.

Today, I would find the courage to inquire about what I desperately wanted to know.

“Doesn’t it bother you?” I asked out loud.

I pointed at her waist.

I nodded, afraid to say the word like it was a taboo of some sort.

She laughed and shook her head.

“But it’s black,” I muttered, unable to help it.

I raised my eyebrows in disbelief, and she peered at me curiously.

“What? Why do you not believe me?”

I shrugged and picked up an onion. Lota walked towards me.

“Adamma, listen to me. You see this skin?” she asked, pulling at my dark flesh, “this is rich. God that gave this melanin took a handful into His palms and gave you a good coating. Omalicha, why have you believed in anything else? A woman is more than a birthmark or a scar, more than a skin colour, or anything on the surface, I na-anu? Have you heard me, Ada?”

“A woman is beautiful when she owns her colour, Ada. When she respects and worships her body for the powerful thing that it is, and then takes care of herself from the inside out. If she does not love the image that she sees on the outside, what good is that? A house that you must live in till you return to the dust?” she added, and as she walked back to her pot, it felt like a chunk of my burden went away with her.

For the first time, I wasn’t wondering if Dark Chocolate could ever be my mother’s thing, a lover’s thing.

For the first time in my life, I was starting to entertain the thought that Dark Chocolate could become my thing.

Something I could actually like, enjoy being wrapped with, and feel proud of.

White Chocolate might be nice, but maybe Dark Chocolate was too?